It can come as no surprise that I love baking. It is without a doubt my number one hobby. But as much as a love it, it does come with its downfalls; what is made has to be eaten and it usually doesn’t last. I know what you’re thinking – that doesn’t sound like a downfall at all..? But when people are on diets around you and you know you should be eating healthy yourself it can be very hard to justify baking so much.

So I always try to make the most of special occasions, whether that’s making Banoffee Cake for Thanks Giving, Chocolate Nut Bars as a house warming gift or a three tiered Baby Shower Cake! The best kind of baking is baking to share.

Last weekend we had our annual Christmas dinner gathering with what Ben and I dub the ‘Aussie Crew’. An affectionate name for the first group of friends we made when moving to London nearly five years ago. They’re mainly Aussies but of course there is us and some locals too. Every year we celebrate with a boozy pub dinner before people start flying out for summer Christmases (there is always someone in a big group of expats).

This year I took the chance to make everyone little parcels of brownies. I made the tags from Christmas themed images I have collected over the years. I struggle to throw anything remotely reusable away, so it’s always good to be able to make use of the little bits I’ve kept.

The brownie recipe I used was, of course, Edmond’s. There are two recipes for brownies in the Edmonds Cookbook; Chocolate Brownie which uses cooking chocolate and Coconut Chocolate Brownies which uses cocoa. As I didn’t have enough cooking chocolate I decided to make the coconut ones and sprinkle chocolate chips on top. The universe had other ideas though and I burned my first batch to a crisp, so I still don’t know what the Chocolate Coconut Brownies taste like. As I had used the last of my coconut, I remade the recipe without it and luckily, they still turned out well.

^^^ I asked Ben to try and capture the icing sugar dusting as I thought it would make a nice photo. I should have thought more about the background though.. oops! 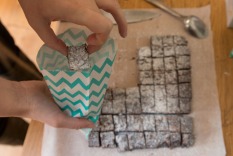 Here is the recipe:

Melt butter in a medium sized saucepan. Add cocoa. Stir over a low heat for 1 to 2 minutes. Remove from heat. Stir in sugar. Add eggs one at a time, beating well after each addition. Beat in vanilla and coconut. Sift flour and baking powder. Stir into mixture. Pour into a greased and lined shallow 20 cm tin. Bake at 180 degrees Celsius for 30 – 35 minutes. Leave in tin for 5 minutes before turning out onto a wire rack. Cut into bars and dust with icing sugar.

Note – It definitely did not need 30 minutes in my oven. We are slowly learning that our new oven is on the hot side though and especially on a fan bake option that is going to be a lot hotter than the oven that this recipe was written for. I would check after 15 minutes to avoid disaster – an overcooked brownie is the worst!

Oh and here is us in our festive hats and jumpers… 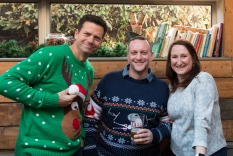 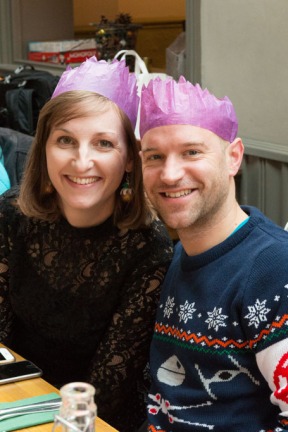 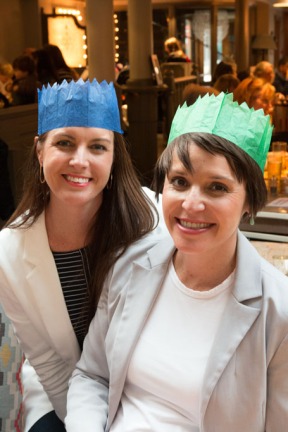 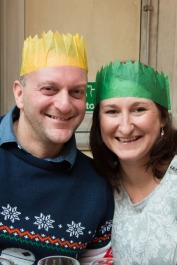 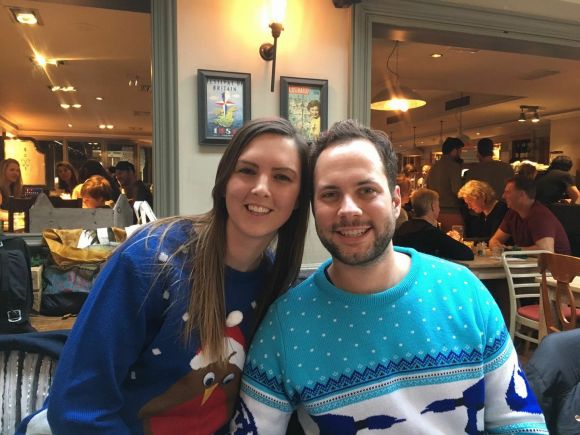 I can highly recommend these Racing Santa Christmas Crackers from Sainsbury’s too. 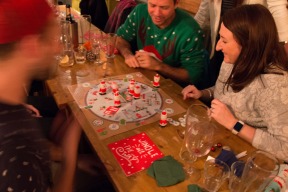 ^^^ It all got quite competitive

I hope you all enjoyed your brownies guys. See you in the New Year!