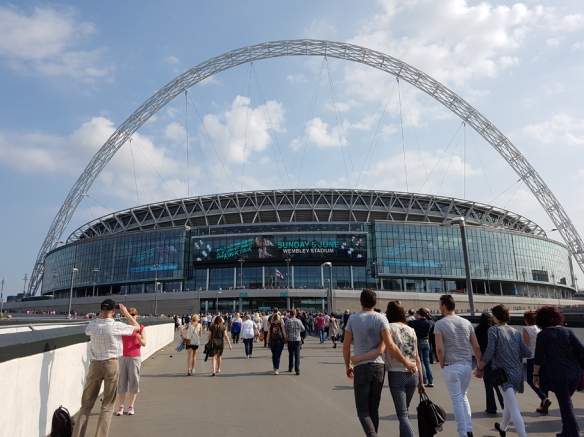 Did you read that? AT WEMBLEY!!

I’ve wanted to see a gig at Wembley since I was about 16 years old. Many of my life goals originated around this time in my life; I was reading music mags, coveting obscure indie bands and dreaming about how my life would be when I was a “grown up”. I longed for the massive music festivals of England and America, endless gigs at infamous clubs and the kind of seminal events that define musical eras. Woodstock, Burning man, Isle of Wight, Glastonbury, Reading and Leeds, I read about these festivals in awe.

I had such a romantic idea of these events, and nothing captured my imagination more than Live Aid. Live Aid was a charity event held over at two venues simultaneously Wembley Stadium, London and John F Kennedy stadium in Philadelphia. You all know the Christmas Carol Do they know it’s Christmas? Right? If not here is a refresher. Bob Geldof wrote this to raise aid for famine sufferers in Ethiopia in 1984 and the Live Aid concerts were devised on the back of that to continue to raise money.

The gigs were streamed across the world on TV and according to Wikipedia had a global audience of 1.9 billion. A big deal for its time. I wasn’t one of the audience though, it was 1985 and I wasn’t coming into the world for a couple of years yet.

My friend and I discovered Live Aid in 2005 when Bob Geldof was planning another event to support the aid started with the original concert. At the time a commemorative DVD set of the original concerts was released for the first time and I wanted it so much. It was a shiny box set with 4 DVD’s of the gigs plus unseen footage. My friend and I put our pennies together to buy it and shared it between us for years.

We sat and watched those concerts together over and over. Some of the highlights included a not-quite-yet-mega-star-Madonna; Phil Collins flying between both concerts in a now defunct Concord high speed plane; and oh so many duets. I can’t remember exactly who sang with who now, but there was a big feeling of collaboration and not much pretension. In both gigs the whole stage filled at the end of the night for the final few songs.

The DVD also introduced me to Bruce Springsteen, although he actually didn’t play at the gigs, extra footage was included as he was so big at the time. This is what introduced me to Bruce. After this I picked up a tape at a music warehouse, Real Groovy for my Kiwi mates, and played it over and over in my dinky little car. Even now I still associate Bruce with driving and road trips.

So when I found out that Bruce was playing Wembley, I was going. Of course I didn’t make it easy for myself, I found out a week before he was due to play and spent the week watching ticket reselling sights like a hawk and in the end buying off a lovely lady through Twitter. She sold them to me at face value and didn’t even pass on the booking charges. What a good human? Love her.

So, now for what you were expecting…. a review. 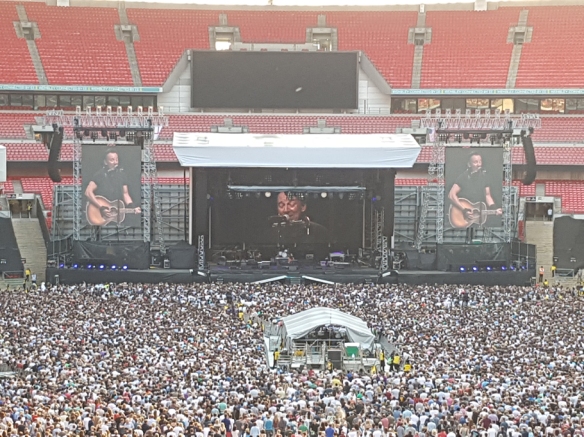 We ambled up to the stadium early on the sunny Sunday to soak up the atmosphere. We sat outside eating ice creams and people watching. We were on the younger side of the crowd which we expected. I had worried that it would be a bit quiet up in the stands, but I needn’t have, the oldies still got into it, after a few wines of course. 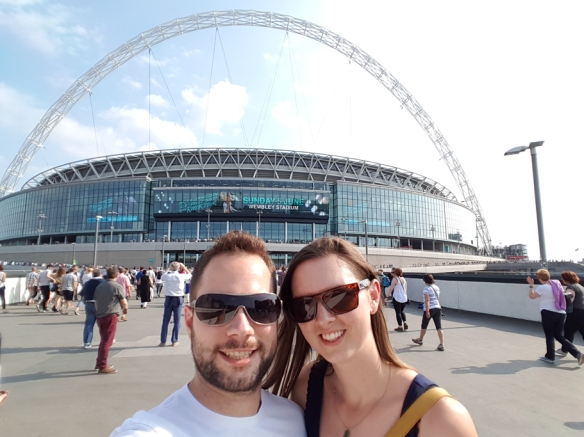 As we entered the stadium we bought some merch’ and took our seats in the middle tier. We should have bought hats, as we soon realised that the sun was slowly setting right in our eyes. We were sat surrounded by a crowd of people wearing Wembley branded hats as they got in before they sold out. 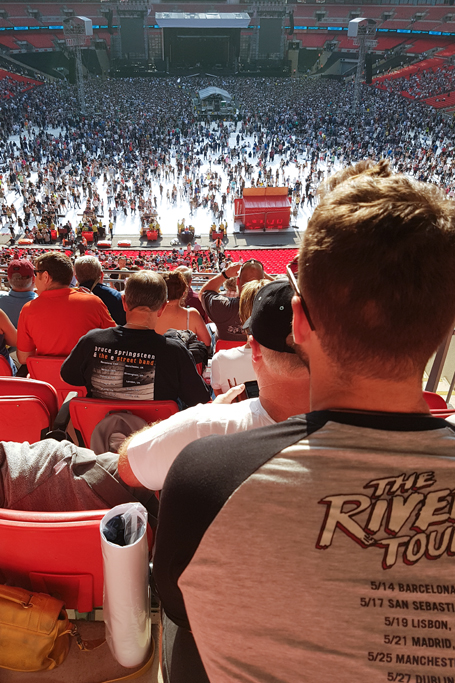 As the stadium filled and we got through our first couple of drinks.. 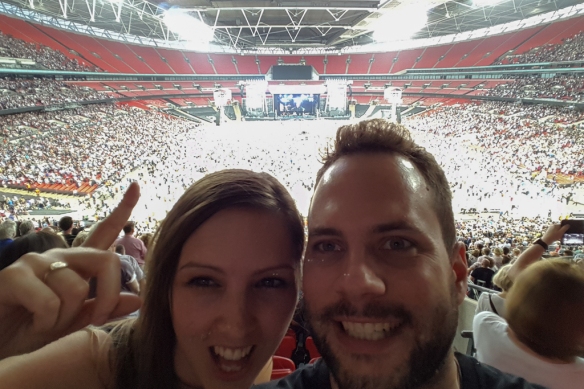 The Boss ran out from behind the stage and straight down to greet the crowd. No preamble, no roaring introductions just straight into it. He would spend most of the night interacting with those in the front of the stage.

As the first chords rang out and the buzz of the music made its way around the stadium, there sheer size of the place became apparent. We were so far from the stage Bruce and the band were just specks in the distance. The distance is so great that we would see what he was doing on the stage and on the big screens before the wave of sound would wash over us. The sound was epic, roaring around the stadium. The crowds’ cheers echoed in a huge boom around the stands, 70,000 people whooping and screaming sounds like booing when they all converge. 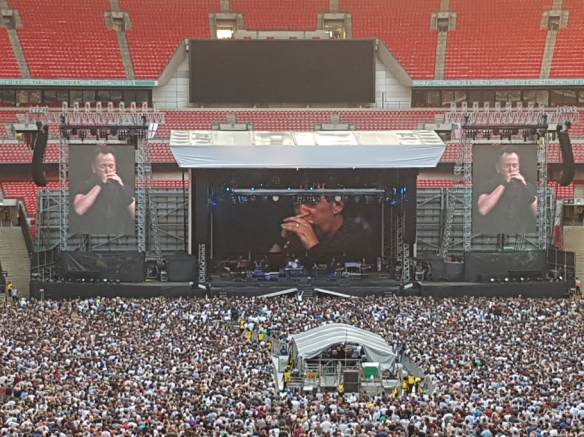 So, how do you engage with an audience this size? Well if you’re Bruce that means hanging out with your audience. I have never seen a performer spend so much time with their audience. Right from the get-go he started gathering up signs from the crowd. We soon discovered that these were song requests.  He did about three requests from the audience using the signs to introduce them. One request, I’ll Work For Your Love,  he was so stoaked with, thanking the requester and then struggling to remember the chords it had been that long since he’d played it.

Other crowd antics included chugging a pint of larger from a fan during Spirit In the Night. Donning sunglasses and party hats from the crowd, nearly being upstaged by a gorgeous little girl plucked from the crowd to sing the chorus to Waitin’ On A Sunny Day and probably his most famous party trick, inviting people up to dance on the stage for Dancing In The Dark.

What got me was the sight of thousands of hands swaying in time in front of us to Tougher Than The Rest – dedicated to the late Muhammad Ali who passed away two days before – and The Rising. This is what had me captivated watching Live Aid; a huge crowd all participating in one moment. Swept up in one feeling, I’m completely gushing but it really was magical to see. 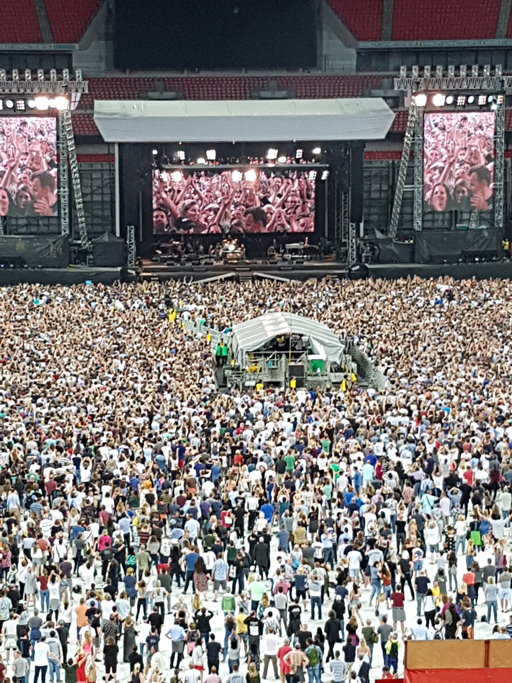 The main set ended on one of my favourites Badlands before kicking into an encore of the crowd pleasing stadium filling hits he’s known for including Born To Run and Dancing In The Dark.

Bruce lived up to his reputation playing three and a half hours straight and smiling the whole way through. Really the only way to describe the performance was genuine. He was having a good time and worked hard to ensure his band on the stage and everyone in the crowd had a good one too. 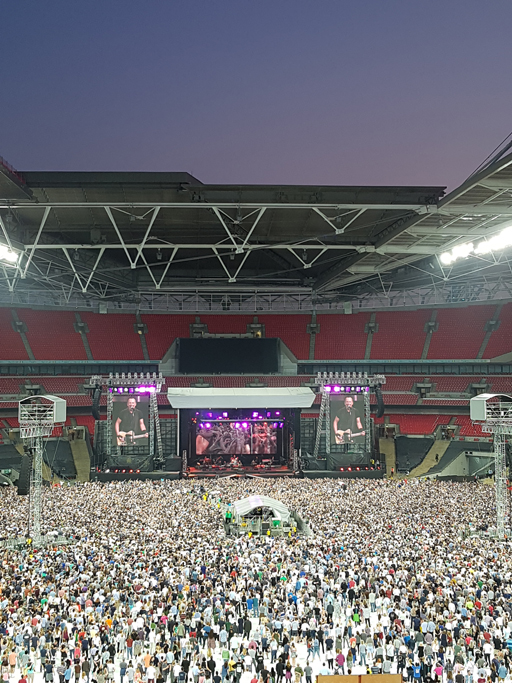 And then as if to prove just how much he was enjoying things, not wanting to leave the stage and the crowd after the encore, he settled in for one last tune. An acoustic version of Thunder Road. Bliss… I wanted another 3 hours. 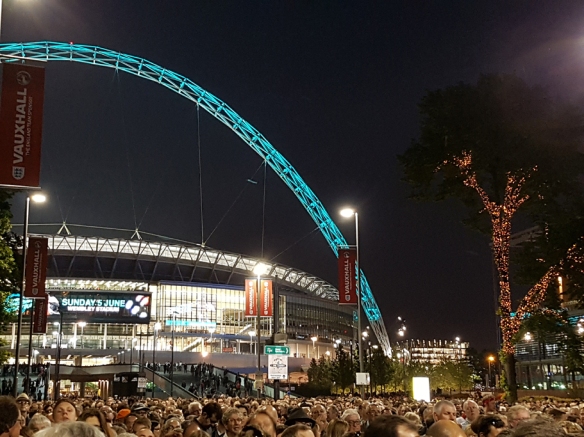 We walked out singing with the crowd on such a high.. 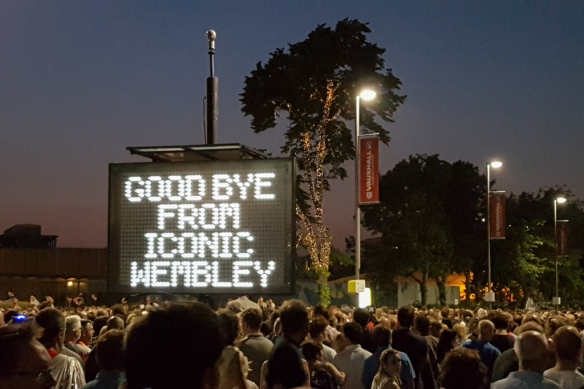 I read he is going to turn this tour into a DVD… You know I’ll be buying it. For the 16 year old dreamer in me.

1 thought on “Bruce Springsteen at Wembley”